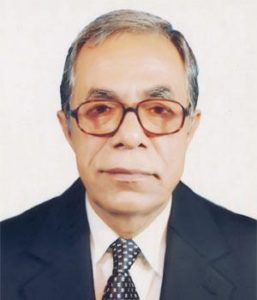 Hon’ble President of the People’s Republic of Bangladesh

Mr. Md. Abdul Hamid passed his Matriculation from Nikli G.C. High School and both I.A and B.A from Gurudayal College of Kishoregonj. He obtained Bachelor of Law degree from Central Law College under Dhaka University. Afterwards, he started his profession as a Lawyer.

Mr. Md. Abdul Hamid joined Chhatra League in 1959 and thereby his political career began. While studying in the college, he took leading part in anti-Ayub Movement in 1961. He was imprisoned by the then Pakistan Government in 1962 for his active participation in the student movement and opposing Hamoodur Rahman Education Commission Report. In 1962-63, he was elected General Secretary of Student Union in Gurudayal College of Kishoregonj and in 1965-66 the Vice-President of the same student union. Mr Hamid was the Founder President of Chhatra League of Kishoregonj Sub-division Unit in 1964 and also elected the Vice-President of Chhatra League of Mymensingh District Unit in 1966-67. He was again imprisoned in 1968 for leading student movement. Towards the end of 1969, he joined Awami League.

In 1971, on being instructed by Bangabandhu Sheikh Mujibur Rahman, he started the movement in Kishoregonj amid tumultuous protest against Pakistani regime to create public opinion in favour of independence. In the wake of movement, he hoisted the flag of independent Bangladesh inscribed with the map in a huge student gathering at Rothkhala field in Kishoregonj on March17, 1971 in which thousands of students and people participated. On receiving the historic proclamation of the Father of the Nation Bangabandhu for independence through a telegraphic message in the morning of 26 March in 1971, he instantly joined the Liberation War. With the cooperation of Bangalee Army officers in the early part of April 1971, Mr. Hamid procured approximately tk. 11 Crore and 78 lac from Kishoregonj, Bhairab and Bazitpur branches of National Bank of Pakistan and deposited the whole amount safely in the National Bank of Pakistan at its Brahmanbaria Branch considering that as a safe place of custody at that time for using it for the War of Liberation.

Thereafter, he went to Agartola, India to take part directly in the War of Liberation. At that time, most of the Members of Parliament of greater Chittagong, Noakhali and Comilla had been staying there. Mr. Hamid discussed various strategies of Liberation War with them. Side by side, he exchanged views with the local public representatives and high government officials in Agartola. Later, towards the end of April, he again came back to Bangladesh to further organize people and went back to India. Taking several associates with him, he reached Balat via Tekarhat, Gumaghat, Panchara and Moilam of Meghalaya. He set a Youth Reception Camp in Balat for those who came from Bangladesh to participate in the Liberation War. He was the Chairman of that camp. The primary recruitment of the youth who came from Kishoregonj, Netrokona and Sunamgonj to join the war as freedom fighters, was mainly done in this camp. He was also one of the prominent members of Zonal Administrative Council constituted at Meghalaya to direct the Liberation War and for the better management of the refugees. He also acted as the sub-sector commander of Bangladesh Liberation Force (Mujib Bahini) for Kishoregonj and Sunamgonj Districts. He carried out those responsibilities for the entire period of Liberation War. After the victory of liberation war on 16 December, 1971 he organized meeting at various refugee camps in Meghalaya to motivate the Bangalees who took refuge there to return home. After the homecoming of the refugees, he returned to the country on 10 January 1972.

As a member of Sustainable Development Committee of Inter Parliamentary Union (IPU) from 1997 to 2000 and the member of the Executive Committee of IPU from 2011 to 2013, Mr. Hamid played his due role. He was also the member of the Executive Committee for Commonwealth Parliamentary Association (CPA) for two terms from 1999 to 2001 and from 2009 to 2012. He is the Life Member of Kishoregonj District Public Library, District Shilpakala Academy, Red Crescent Society and Kishoregonj Rifles Club respectively. He is also the honorary member of Kishoregonj Press Club and associated with many other philanthropic institutions.

For his outstanding contribution to our Independence and Liberation War, Mr. Md. Abdul Hamid was conferred the Independence Award-2013, the highest award of the country.

Mr. Hamid is married and father of three sons and a daughter. Reading books on history and constitutions of different countries is his favorite pastime.