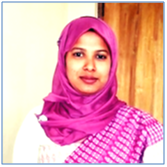 Taslima Akter was born on 04 march, 1983 in the village of Charsholadi, Haimchor,  in the district of Chandpur, Bangladesh. She passed the Secondary School Certificate (SSC) examination in 1999 securing 1st Division from the kalachandpur High School, Dhaka; and the Higher Secondary Certificate (HSC) examination of 2001 securing 1st Division from the Shahid Anwar Girls’ College. She has completed B. Sc. Fisheries ( Hons.) in 2007 obtaining 2nd highest CGP 3.935 out of 4.00 from Bangladesh Agricultural University, Mymensingh.  She has In the year of 2009 she have completed M.S in Aquaculture securing CGP 3.961 from Bangladesh Agricultural University, Mymensingh. For her meritorious performance in obtaining Graduation degree among all the faculties in the year January- June 2007 she awarded Professor Md. Shahidul Hoque Gold Medal, Bangladesh Agricultural University also obtained NSICT Fellowship, Government of Bangladesh 2008-2009. In personal life she is the only daughter of Md. Anwar Hossain and Shahina Hossain and has two younger brothers. Taslima Akter got married to Mohammad Shahedal Kaium in the year of 2010 and they are the proud parent of one son and one daughter named Safwan Labib and Safaa Lamia.

Taslima Akter started her service in 2010 as a Lecturer, Department of Coastal and Marine Fisheries, and promoted as Assistant Professor in 2012 in the same department, Sylhet Agricultural University, Sylthet 3100. In the year of 2014 she has joined as Assistant professor in the department of Aquaculture, Bangabandhu Sheikh MujiburRahman Agricultural University, Gazipur and till date is working in this position. Taslima Akter  is a member of Bangladesh Association of Scientists and Scientific Professionals and  Krishibid Institution of Bangladesh.