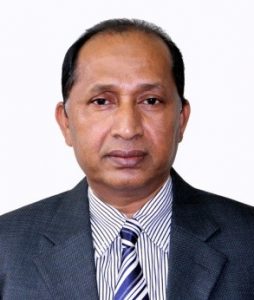 Prof. Md. Giashuddin Miah is the Vice-Chancellor of the Bangabandhu Sheikh Mujibur Rahman Agricultural University (BSMRAU). He was born in Narsingdi District and received primary, secondary and higher secondary education from Sagardi Primary School, Madhabdi High School and Narsingdi College, respectively. He obtained both Bachelor of Science in Agriculture and Master of Science in Agronomy degrees in the First Class from Bangladesh Agricultural University. He went to Philippines and did Ph. D in 1993 as a scholar of International Rice Research Institute (IRRI). Dr. Miah conducted post-doctoral research at Kyushu University (1995-96) and National Institute of Agro-environmental Sciences (2000) in Japan under the fellowship of Japan International Cooperation Agency (JICA). Later, he awarded twice the prestigious Commonwealth Fellowship to conduct post-doctoral research at Laval University in Canada (2009) and University of Nottingham in UK (2013).

Prof. Giashuddin Miah’s career is rich in diversified work experiences. He started professional career in 1984 at Bangladesh Tea Research Institute and then moved to Bangladesh Krishi Bank for a short time. He worked as an Agronomist at the Bangladesh Agricultural Research Institute for about nine years. Subsequently, he joined at the Institute of Postgraduate Studies in Agriculture (IPSA) (currently BSMRAU) as an Assistant Professor in 1994. By dint of his outstanding performances, he promoted to the position of Full Professor in 2000. Prof. Miah is the pioneer of establishing agroforestry research and education in Bangladesh as a major discipline in the field of agriculture. For the first time in Bangladesh, he established the Department of Agroforestry and Environment at BSMRAU in 1996 which was followed by BAU and other universities. Over 31 years of successful professional journey, Prof. Miah supervised 110 MS and 21 PhD students. Currently, he has 3 MS and 3 Ph D students at BSMRAU. He has outstanding contributions to the global mass of knowledge and exceptional leadership in advancing the field of agroforestry, resource-use, and environment particularly climate change. He published 105 research articles in the peer-reviewed national and international reputed journals, several book chapters and two books (in Bangali).

Prof. Miah successfully completed a large number of nationally and internationally funded research projects. His projects were funded by many international donors and organization such as APN, EU, FAO, ICRAF, UNESCO, USDA, World Bank and others. He collaborated and lead a series of research projects with international partners from several world-famous universities in Australia, China, Japan, India, Indonesia, Nepal, and Sri Lanka. He attended a number of international events (73) in many countries across the world. He is an active member of 25 national and international professional associations and a member of the editorial board of three reputed journals. He is now serving as the Chief Editor of the Annals of Bangladesh Agriculture. He severed as the Chairman of the Governing Body of the Madhabdi Girl’s School and College for 9 years and made a significant contribution to improvement of academic and infrastructure of this renowned academic institute.

Prof. Giashuddin Miah played a vital role in the establishment of BSMRAU as a Center of Excellence in higher education and research on agricultural sciences. He held many important positions and contributed to the quality enhancement of BSMRAU namely the Treasurer (appointed by the Honorable President of the country for four years), Dean of the Faculty of Graduate Studies, members of the Syndicate, Selection boards, Academic Council, and Planning Committee. He also served as a member of the Syndicate of the Sylhet Agricultural University for three years. He has been serving as the member of selection committees of many public universities of Bangladesh.

Professor Miah is an internationally personality in the field of agroforestry. He has been representing Bangladesh in the Asia Pacific Network for Global Change Research (APN) since 2005. He served as active members of its various important bodies such as Capacity Development Committee, Steering Committee, Scientific Planning Group (SPG), SPG Sub-committee and South Asia Sub-Committee. Recently, he has been elected as the Co-Chairs of the SPG of APN. Another notable leadership of Prof. Miah is that he has been playing an important role in the expansion of ICRAF’s (World Agroforestry Centre) South Asia mission in Bangladesh since inception. In recognition of Prof. Miah over all contribution to science, he was awarded the “Amar Ekushey Smriti Padok 2016” by the Bangladesh Education Observation Society.