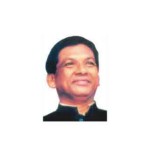 Its an undergraduate student’s Dormitory of Bangabandhu Sheikh Mujibur Rahman Agricultural University. It’s previous name was BS Dormitory, BSMRAU.BS Dormitory name was changed to prominent figures in the histories of Bangladesh,Shaheed Ahsanullah Master, former lawmaker of Awami League. Ahsanullah Master, a freedom fighter and a lawmaker from Gazipur-2 constituency and also a Sramik League leader, was shot dead at a rally of Swechchhasebak League in Tongi in 2004.Ahsanullah Master was elected as the Member of Parliament for two times from Gazipur-2 constituency in 1996 and 2001. He was also national committee member of the Awami League and was involved with different national and internationl organizations.