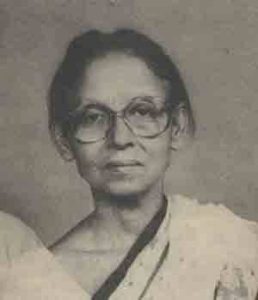 Ila Mitra (née Sen; 18 October 1925 – 13 October 2002) was a peasants movement organizer of the Indian subcontinent, especially in East Bengal (now Bangladesh).
Mitra’s ancestors were from Bagutia village in the present-day Jhenaidah District. She was born on 18 October 1925 in Kolkata. She completed her IA and BA examinations from Bethune College in Calcutta in 1942 and 1944 respectively. She obtained her MA degree in Bangla literature and culture from Calcutta University as a private candidate in 1958. She was a member of Calcutta Mohila Atmarakkha Samiti and of the All India Communist Party. In 1945, she married Ramendra Mitra, an active member of the communist party despite and from a family of zamindar of Chapai Nawabgan.
Mitra was the leader of peasants and indigenous Santhals in greater Rajshahi region, currently in the district of Chapai Nawabganj, and was often referred to by them as RaniMa (Queen mother). She organized a peasant-santhal uprising in Nachole Upazila, Chapai Nawabganj on 5 January 1950, but the uprising was thwarted by the police. Mitra was arrested by the police while trying to escape. She was detained at the Nachole police station for four days, and during the detention, she was repeatedly gang-raped and tortured by the policemen. Then she was sent to the Rajshahi Central jail on 21 January 1950, where she was reportedly tortured for not accepting her involvement in the rebellion. After a trial for treason, Mitra was sentenced to life imprisonment.