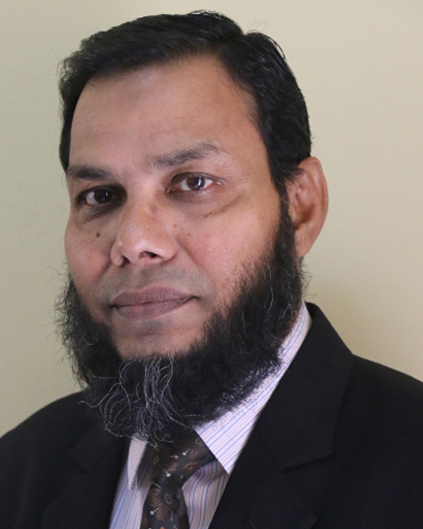 Profesor Dr. G.K.M. Mustafizur Rahman has appointed as the Dean of the Faculty of Graduate Studies of Bangabandhu Sheikh Mujibur Rahman Agricultural University on 10th June 2022.

Dr. Mustafizur Rahman is a professor of Environmental Soil Science but he began his teaching career at the Department of Soil Science of Bangabandhu Sheikh Mujibur Rahman Agricultural University (BSMRAU),  a special agricultural  university (Central of Excellence for agricultural education) of Bangladesh as an associate professor from May 30, 2004. He promoted as a full pledged professor in the same Department since 2008. Prior to which he had been served as a Senior Scientist at the Bangladesh Institute of Nuclear Agriculture (BINA) for the period of 14 years. He has been involved with teaching and research on Soil Chemistry, Environmental Pollution Chemistry, Biogeochemistry and Climate Change aspects. He obtained his BSc. in Agriculture Honors in 1988 and MSc. in Soil Science (Soil Phosphorus Chemistry) in 1993 from Bangladesh Agricultural University (BAU). He earned his Ph.D. degree in Pesticide Chemistry (Pollution Research) in 2000 from Laboratory of Pesticide Toxicology of Chiba University, Japan.

Dr. Mustafizur Rahman was nominated from BINA by International Atomic Energy Agency (IAEA) to attend a 30 days Acid Soil Management extensive training program on “The Use of Isotope and Radiation Techniques in Studies of Soil/Plant Relationships with Emphasis on Crop Production on Acids Soils” from March 6 to April 7, 1995, organized by the Department of Agriculture, Bangkok, Thailand. He was also nominated by his Ph.D. supervisor of Chiba University to take an esteemed training program on “pesticide and heavy metal in the environment” May 16 to 31, 2000. Japan Analytical Chemistry Consultant Co., Ltd. (JACC), Japan.

He was awarded two prestigious fellowships for a visiting professorships, as an progressive researcher on “Environmental Soil Scientist and Biogeochemist” at the Institute of Soil Science (ISS) of Chinese Academic of Science (CAS) for 6 months funded by CAS fellowship from November, 2013 to April 2014; and also as an innovative researcher on “Biogeochemistry” at King Abdul Aziz City for Science & Technology (KACST), Saudi Arabia, for two months funded by KACST fellowship from February 2015 to March 2015. He has served as soil health environment and arsenic expert/consultant part-time basis for 8 months (Jan 2011 – Aug 2011) in the IRRI arsenic project in IRRI Bangladesh office funded by IFAD and for 3 years (Nov 2011 – April 2014) in the project climate change project entitled “Rice production in drought areas of Bangladesh” funded by World Bank/KGF/BARC.

He has to his recognition more than 100 research papers in journals and most of them published in the SCI thomsonreuters journals. He has edited two books entitled 1. Assessment of Traditional and Modern Technologies in Climatically Vulnerable Ecosystem and Development of Strategy for Combating Impact of Climate Change in Bangladesh” published by DANIDA and PSU-PC Bangladesh (2013), 2. “Lime Technology for the Acid Soil Regions of Bangladesh”. Outstanding Project findings. Published & funded by Food for Progress Program in Bangladesh, funded by USDA, (2014).

Dr. Mustafizur Rahman continually challenges his students and sets high expectations for them. He is recognized as a familiar Ph.D. guide by BSMRAU and other agricultural university of Bangladesh. The total of 25 research scholars have been awarded Ph.D. under his guidance and among these 25 scholars, 10 of them have been successfully awarded their Ph.D. degree under direct supervision and major professorship of Dr. Rahman and other 15 have been completed their dissertation research under him and he served as a co-supervisor for them. He is also a motivational speaker and has conducted many workshops on the topics of Soil, Water, Pollution and Climate change. He is the external thesis examiner of University of Putra Malaysia (UPM) and other agricultural universities of Bangladesh. Besides he is involved with the editorial board of Journal of “Annals of Bangladesh Agriculture“, Journal of Environmental Sciences & Natural Resources” and “Journal of Environmental Science” of Bangladesh. He has been serving as a member of many administrative and research committees of BSMRAU and other agricultural universities and institutes.